See our Healthy Travel Information page for the latest information on openings, guidelines, and COVID-19 updates. Harrison and Jackson Counties masks are mandatory for public gatherings and shopping environments. 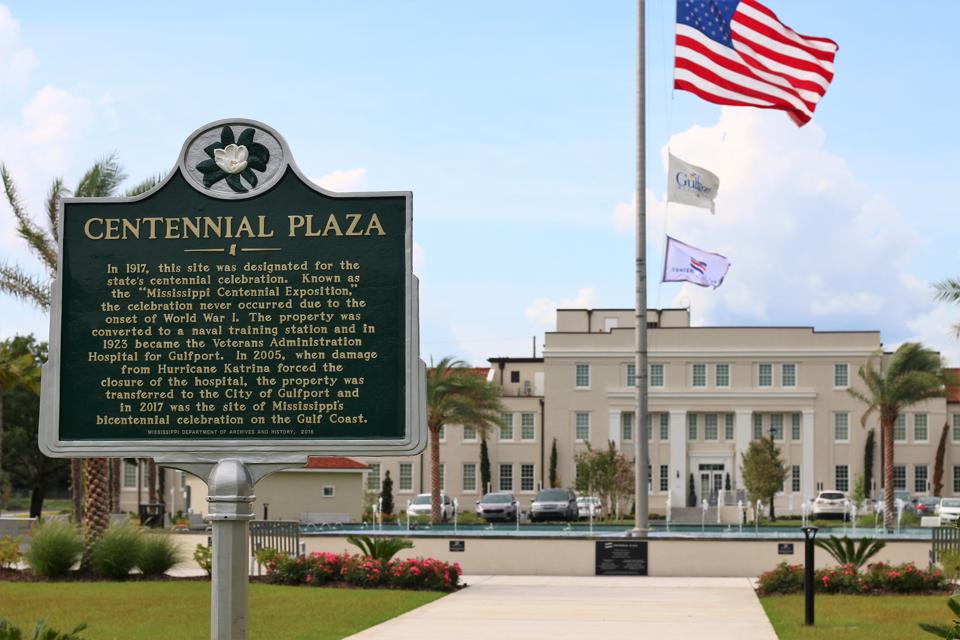 The doors have opened on the Gulf Coast’s newest draw in Gulfport, Mississippi. A beachfront, mixed-use hospitality and entertainment destination, Centennial Plaza is situated across 48 acres paralleling the majestic Mississippi Sound, on the former site of the Veterans Administration Medical Center.

The reimagined land use of the historic campus invigorates this key piece of real estate for visitors and local residents alike. Two distinct hotels, a pair of restaurants and event spaces promise exceptional experiences, as intended by the development partners.

"We are beyond thrilled to have been able to bring this property back to life," said Centennial Plaza Public Relations Director Tessy Lambert. "We feel it will continue the revitalization of the Gulf Coast."

Hospitality and tourism are two of the larger gears that turn the South Mississippi economy. Centrally located between New Orleans and Mobile, Gulfport is an hour’s drive from both directions, and only 160 miles from the state capital of Jackson.

Tourism accounts for over 25% of Gulfport’s economy. By 2020, the $93 million Mississippi Aquarium is slated to open in downtown Gulfport, expected to draw a half-million visitors per year. One year ago, Mississippi became the fourth state to legalize sports betting in its ever-popular, 24-hour casinos. With the second-largest airport in the state, Gulfport-Biloxi International welcomes nearly 800,000 travelers annually. Centennial Plaza, operated by Lodging & Leisure Investments, LLC, is primed to capitalize on this momentum and accelerate it.

"Centennial Plaza is an absolutely phenomenal resort that will play a vital role in the elevation of Coastal Mississippi as a premier destination," said CEO Milton Segarra of Coastal Mississippi, the regional convention and visitors bureau. "This remarkable waterfront investment truly reflects the importance of the travel and tourism industry and the significant economic impact that it has on the region and state as a whole."

Place Of Caring For Those Who Served

Just over a century ago, this land was developed to host Mississippi’s centennial celebration in 1917, complete with temporary exposition buildings. Instead, that development effort adapted to an expressly national purpose as the United States entered an ongoing global conflict, the Great War, World War I. The site became a training station for the Navy.

After the War, the naval camp was deactivated in 1921, and shortly thereafter, the Veterans Bureau, as it was known then, acquired the property and planned a building and landscape program more suitable for patient care and staff housing. For nine decades, the Veterans Administration Medical Center - Gulfport Division was an anchor institution for the community and region.

Fast forward to Hurricanes Camille and Katrina, whose devastating winds and surge damaged the VA campus. Although the VA stabilized, repaired and cleaned up, by 2009, they conveyed the property to the City of Gulfport. Local and state government worked to nominate the property for Mississippi Landmark status, and later, the campus was entered in the National Register of Historic Places in 2014.

Now, in concert with the Gulfport Redevelopment Commission, the development partners repurposed the 10-building historic district and, just after Mississippi’s bicentennial, Centennial Plaza is open.

Rolling Out The Tenant Roll

The Grand Centennial Hotel is designed with luxury in mind for business and pleasure travelers, offering 63 rooms between two buildings, characterized by high ceilings and appointed with stunning décor, setting the scene for overlooking the manicured resort grounds and a 25,000-gallon dancing fountain.

The Blue Marlin, a coastal-casual seafood restaurant, provides hotel guests and the public an elegant dining experience, with panoramic views of beach sands and the Gulf of Mexico. The restaurant is open daily for dinner, as well as brunch on weekends.

Oasis Resort has 152 hotel rooms across two historic buildings, with both traditional floor plans and what they’re calling Kid Suites. Centennial Plaza is billing it "the best family destination on the Mississippi Gulf Coast.” Kid-friendly accommodations include a 3-acre water playground, with a colorful splash pad, water slides, a 950-foot lazy river and a zero-entry swimming pool.

Oasis Grill cooks up delicious dining experiences daily for hotel guests and the public during breakfast, lunch and dinner.

The Chapel at Centennial Plaza, which seats around 250, already has multiple bookings and is positioned to become a venue in high demand by wedding planners.

With its 15 acres of green space complemented by the cool tree canopy of mature live oaks, Centennial Plaza amps up the atmosphere for festivals and concerts. Back-to-back events mark the calendar, with the inaugural Chillin' on the Gulf Coast music, food and arts festival set for September 20-22, followed by serving as "Cruise Central" for the annual Cruisin’ the Coast festival from October 6-13, celebrating antique, classic and hot rod vehicles and more — the biggest special event annually in Mississippi.

"Centennial Plaza’s diverse offerings for visitors of all ages and business groups alike," Segarra added, "showcase the array of opportunities that The Secret Coast has to offer in terms of product, services, and experiences."